A precious piece of Song Dynasty porcelain was damaged during "nondestructive" testing by a research staff member, the Forbidden City authorities confirmed on Sunday, a day after a Web user had already leaked the information online.
Weibo microblog user Long Can alleged on Saturday that a Southern Song Dynasty (1127-1279) porcelain plate had been smashed about 20 days ago. The thread was reposted more than 15,000 times as of on Sunday evening.
The museum confirmed the claim on Sunday, announcing a Ge kiln blue glaze plate had been damaged. The 4.1 centimeter-high, 20.2 centimeter-diameter plate is one of 1,797 relics listed as national grade-one quality on the official museum website.
"The plate was crushed in nondestructive testing," Chang Lingxing, a publicity office employee of the museum, told the Global Times on Sunday.
Chang refused to reveal exactly how the expensive plate was damaged or how bad that damage was. Nor would he speculate about why the Palace Museum had waited 26 days to announce the accident.
The museum does not price its collection, Chang said, leaving the question of financial losses also unanswered.
"There's no way to estimate the value of national grade-one cultural relics," private collector Ma Weidu told the Global Times on Sunday in Beijing, "but as far as I know in auctions held in New York and London last year, the strike prices for two Ge Kiln porcelain pieces were more than 10 million yuan ($1.6 million) each."
Ma was quoted by China National Radio on Sunday as calling the accident the result of an irresponsible attitude on the part of the museum.
"It's all about being responsible," he said.
A museum-appointed investigation team had established the cause of the accident on Tuesday, according to a press release issued on Sunday by the museum.
The investigation team had also decided to punish the culprit, Chang said, but would not say how. He refused to identify the researcher either.
The testing was part of a Song Dynasty ceramics study project, suspended since the accident. A "nondestructive machine" had analyzed more than 50 ceramic pieces before the project was halted, according to the press release.
Slipcast is brought to you by Matt and Dave's Clays.
Porcelain for the People!
Clays designed by Scientists to work for Artists.
Check out our new lower prices! 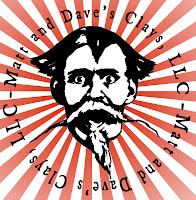 Posted by Matthew Katz at 9:03 AM No comments:

Email ThisBlogThis!Share to TwitterShare to FacebookShare to Pinterest
Labels: If it's not broken...then break it.
Newer Posts Older Posts Home
Subscribe to: Posts (Atom)